Our friends the Landscape Gardeners

Somehow when one writes a blog, one’s friends consider they can get a lot of free publicity on the back of it.  I’d love that to be true yet doubt more than a handful of people have even heard of my blog, let alone take any notice of it.

However, I made a promise that I’d try and I’d write a short article about my friend Tony’s landscape gardener Horsham business called Horsham Decks and Patios.

This Horsham business undertakes all types of landscaping, from building little paths through a pretty back garden to constructing a large patio or terrace.  At the moment it appears composite decking is a popular choice for keeping feet dry in the winter and at the other end of the spectrum, expensive york stone paved patios are also coming back into fashion.

Tony and his team are very good at their job and have done some wonderful garden construction jobs over the years. I’ve personally seen several and been most impressed.  One of the gardens I visited was built on a slope and required a huge amount of work to build level platforms. The result was astonishing as a sloping rubbish patch was turned into a series of three level decks.  That particular garden featured in a well known magazine and won Horsham Decks and Patios a prestigious award – I can’t remember the name of it or I’d print it here!

So all I can say is if you need any sort of Horsham landscaping done, please feel free to say I recommended the company.  I’m not much good at marketing or selling, so forgive the plug.  I do thoroughly recommend Tony though.

When my Grandfather suffered a stroke in my early twenties, the drywall business with our family name attached died off. None of the children were interested in taking over, and myself, I knew nothing of drywall. I’m sure it hurt him a little to see that no one was going to directly fall into his footsteps in that sense, but he was still happy with a roofer and painter son, and a landscaping daughter to carry on the traditions for him, but he seemed to push even further into me. Wanting me to learn a trade of some sort that could be used to bring more into the world, to build something.

When he passed, I learned that he willed me his violin. Out of everyone in the family, I was the one who followed in these footsteps. I may not have been into drywall, or roofing, or building, but I loved the music, and learned everything about violin making passed on through generations. I don’t know why it became so much more important for me to keep that legacy alive than ever. I never paid much attention to legacy until he died, but I knew that I had to do something to keep this family tradition alive, as I was the only one who could.

So, I followed in my Grandfathers footsteps, laid out years before I was born. I bought a plot of land, and a building permit. It was my goal, to build a violin shop that sold handcrafted violins in our family style. Throughout my life I had made dozens, and only played them myself, and maybe, just maybe I could make a living out of it. It was such an ambitious reach that I was almost certain that I would fail, but I felt I owed it to my family, and to my Grandfather’s hard work, for without it, I wouldn’t be here.

I learned how to dig a foundation, we poured our cement and had the first piece of the puzzle figured out. With my aunts and uncles we began to team together to figure out every last aspect of the place. Framework and building, my uncle up on the roof getting it all laid in and properly installed, myself and my uncles putting up the drywall, talking the whole time about how Grandpa had done this almost his whole life and yet we all knew next to nothing about it.

As the outside work was being completed, and my aunt taking control of the landscaping, I needed help with the interior, so I wound up calling a local design team to bring us a hand as I knew nothing about this part of the build. They sent over a rep to look at the space and to help come up with a design plan, and I have to admit, it was love at first sight. We bonded closely over the project, and I proudly married her four years after the shop was done.

Where you came from

We had every service you could imagine going at once on that project. Mirroring the work that my Grandfather managed to do with three people, we had our whole family continuing a half century later. The roofing, the drywall, the painting, the cement work, the framing, the landscaping, the design, everything all coming together from a myriad of sources to create one thing, in juxtaposition to the one man who managed to do all those things on his own, it really made you sit back and appreciate all that he did with his own work ethic and determination, and we often found ourselves wishing we were half as capable as he was on his own.

The funniest part of the whole project, looking back anyway, was how much I appreciated working with my hands. I don’t know if it unlocked part of my ancestral genetic code hidden away, but the drywall work was actually some of the most fun I had on the project. Which I suppose is what got me into eventually working manual labor despite what I thought I would have happening throughout my life span. But, back to the tale at hand. It took us about five months to have the place completely finished and ready to open. It was no grand scene, but it was quaint, beautiful and filled with handcrafted pieces that were born and bred form the minds of my family.

My mother eventually quit working in the restaurant industry and went on to operate sales and lessons bookings at the shop. I went to work with my uncle in roofing, and then branched into my own handyman service, doing everything that I had learned to do throughout the process of building that shop, and turning it into my own second business. Now my uncles come and work for me on occasion, which is great. My wife still works as a designer, and often helps with projects that I may be working on at the time, only my one uncle is the long lost holdout still working in service, and he may get ribbed for it, but he’s happy.

Nearly a century after what started over in a new country, our family follows in the footsteps we walked for as long as we can reach back through the generations. Working with our hands, and bringing music and violin into the world. And I suppose that’s kind of the lesson of this whole blog that I want to get across, that it doesn’t matter what you do, whether you’re in drywall, roofing, painting, building, landscaping, design or anything else, what you do matters. It impacts the lives of those around you, and it carries on in legacy throughout your life. You are not a product of what you do for a living, but what you do while living, what you bring to the world. And whether that’s swinging a hammer, or drawing a bow across strings, you will live on if you leave something beautiful behind.

You see, one fact about my Grandfather that I hadn’t mentioned, and essentially through the whole lineage of my family was music. He was a trained violinist under his dad, and his dad, and all the way back through life. And though construction and trade was the name of the game when it came to our family’s careers, violin in all forms was the passion. Our family had been hand crafting them for generations, and my Grandfather’s first, right from Latvia had always been a focal point on the mantle of their home, which he would break out after a long day at work, while my Grandmother and the family danced. 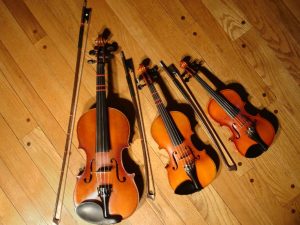 My Mom’s generation followed in the manual labor footsteps, my two Uncles becoming a roofer and painter respectively, and my one Aunt found work in her own Landscaping company. The other two members, including my mom went into the service industry, and yet none of them followed with the music. When my mom was still relatively young, she became pregnant with me. This was not a good thing, and something my Grandfather reacted terribly to. Old fashioned standards, even in the last few months of the Seventies, were to be adhered to, and being out of wedlock and pregnant was a no go.

This caused a rift in the family for a while. With my Grandfather pouring himself into his drywall, the other family members into painting, roofing, landscaping, and serving. It was something that took quite a few years to mend, and it wasn’t until I was out of toddler phases in life that my Grandfather actually took more than a passing interest in me. Not my own fault, but those times are passed, and we’ve all since moved on. The reason we started to bond though, was over the music. I was fascinated with that violin from the first time I heard it, and seemed to be the only member in my family who actually paid attention to it.

Through my childhood, teens and into young adulthood, I learned everything I could from him about it. How to play it, and eventually how to craft them myself. I started to lean towards my mother’s work approach, which my Grandfather always tried to correct. In our family, you work hard. An honest days work for an honest days pay, and when my Grandfather spoke of honest work, he meant work with your hands.

Either in drywall, or painting, or roofing, or construction, or building of any sort was the path that our family had travelled for years, and already two of his children were diverging from that path, he needed to correct that lean with the next generation, and by being the oldest male in the family, that essentially meant me. So when I began to work in coffee shops, and restaurants, the rift between us started to grow again. It was another time that took a while for him to come around to, but it is what it is.